The English walnut harvest at Rusty Acres Ranch typically takes place in late September or early October. The main variety of walnuts planted is Serr, which harvests early to mid-season. While I do my own spraying, mowing, and irrigating, the size of our orchard does not really warrant the large costs of owning and maintaining the harvesting equipment. Glen and Ole Jensen of Esparto, California and their crew do my harvesting. 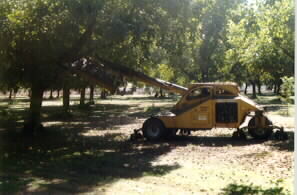 The last irrigation is applied about three weeks before harvest so we have a dry surface to harvest on. About a week or two later, I mow close to the ground with a flail mower. I mow twice, once in each direction to remove as many weeds and early fallen nuts as possible (The nuts that fall early usually contain blight or insects and should be shredded to maintain overall crop quality). The orchard floor does look a bit greener this year than normal since we had about a half inch of rain on September 15, after I finished the mowing operation. This rain was not all bad, as it helps the green hulls to split open so there is a higher percentage of nuts removed during the shaking. The first few photos show the shaker in operation. As you can see, the shaker has an arm with padded claws that clamp onto a limb (or the base of the tree on smaller trees). Once clamped, the operator shakes the limb for 5 to 10 seconds to remove most of the nuts. On larger trees, he will move to a second or a third limb and shake again. How do you avoid crushing the nuts with the tires of the shaker once they are on the ground? In the photo above, note the rubber fingers on the rotating brushes in front and in back of each wheel. When the shaker is in motion, these brushes spin to sweep the nuts out of the way! 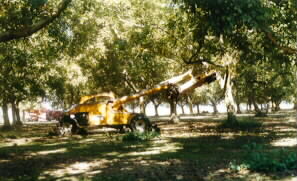 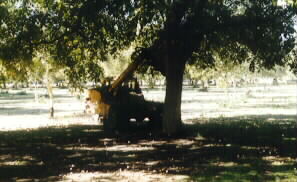 In this photo, you can see the nuts hitting the ground.

The next operation is sweeping the nuts into windrows in the centers. In addition to the sweeper, this machine also has a powerful blower to blow the nuts out of the tree rows and into the center. The sweeping operation requires some hand work, too. Not shown are the people who rake the stray nuts into place and also remove as many twigs and limbs as possible from the windrows. 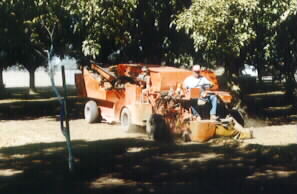 Next step is the harvester, which picks up the nuts from the windrow along with whatever twigs, leaves, and other debris is there, too. 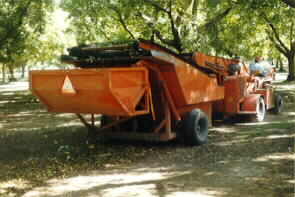 The mixture passes over a series of chains that separates the nuts from the twigs. The nuts fall into the first bin directly over the wheels and the twigs into the smaller hopper with the SMV sign. Most of the hulls are also separated from the nuts at this time, as well. The hulls fall onto the ground behind the machine. 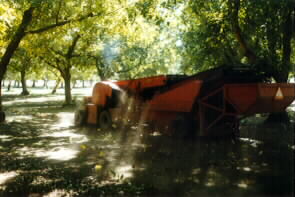 From this view, you can see that there is also a fan that helps to blow out the dust, leaves, and smaller debris, too. 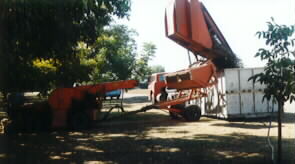 Back to Rusty Acres