On these pages, I would like to share some of the tractors in my collection. I have been collecting vintage (antique?) tractors since 1979. Initially I concentrated on John Deere tractors only, collecting any models I found at low enough prices. I gradually became more interested in the row crop models of the 1930's and 1940's, the Models A, B, and H specifically, and this is where my interest still lies.

The specialized vegetable crops produced in California required higher clearance tractors and the initial efforts of the Deere Company in this area were shipped here. Many of these models were produced in quite low numbers and I was fortunate in managing to find many of these models over the years. I finished my latest restoration project, a John Deere HNH in February 2004.

In the last couple of years, I have discovered that there is life after Deere, and that there are a lot of other interesting tractors out there (besides, it is getting harder and harder to find the unusual JD's). I am especially interested in Oliver 60's and now have all the different variations (row crop tricycle, row crop wide front, standard, and industrial). I finished a bare frame restoration on my Oliver 60 Industrial. And some of the Massey-Harris models are now starting to appear, as well. My latest kick is Silver Kings, I have a current resoration, SK #3050. One of the most interesting and unusual tractors that I have is the Fageol, which is a California made tractor of the late teens and early twenties. This tractor is the subject of an in depth description.

I would also like to acknowledge two of the men who have been important influences on my tractor collecting (and life, in general). The first is my father, Nick J. Boehm, who was born in 1922 and passed away in 1992. My dad grew up on the family farm in North Dakota, farmed himself for a time, but ultimately became a school teacher and moved his family to California. He did not collect tractors himself, but was always helping me in my restorations with both his encouragement and helping hands.

The person who started my interest in tractors and also gave me my first real job as a fourteen year old farm hand was my uncle, Paul Meyer of Gladstone, North Dakota. When I started working on his dairy farm in 1964, they were farming with two cylinder John Deeres- a 730D, 630, styled D, and styled and unstyled B's. This introduction to tractors and farming stayed with me and has been a major influence in my life. 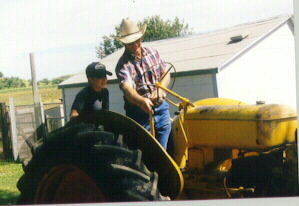